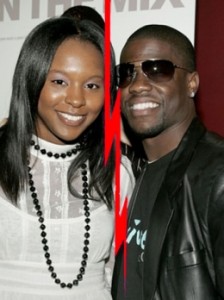 According to celebrity gossip site, TMZ.com, American stand-up comedian and actor, Kevin Hart, may have just pulled off the biggest bargain basement divorce in Hollywood as details of his settlement with ex-wife Torrei Hart, shows that she got peanuts.

Hart, who is worth a reported $9 million, will pay his ex a lump sum of $175,000 but to sweeten the deal, he reportedly gave her a few fabulous parting gifts, including an Escalade and personal stuff like jewelry.

Reports suggest that the relatively small lump sum was largely due to a prenuptial agreement.

However, the Real Husbands of Hollywood star has to cough up $19,785 a month in child support for eight-year-old daughter Heaven Leigh and five-year-old son, Hendrix.

Hart married Torrei in 2003 but in Febrauary 2010, the couple filed for divorce citing ‘irreconcilable differences.’