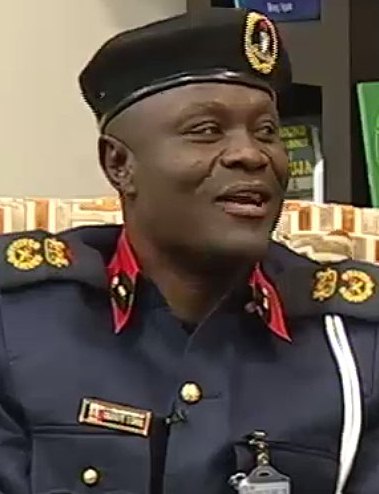 Most of you have heard of the ‘OGA at the top’ joke going round lately. You have not? Viewers of Channels Television breakfast programme – Sunrise Daily were left flustered when Lagos State Commandant of the Nigerian Security and Civil Defence Corp (NSCDC) Mr Obafaiye Shem could not tell his organisation’s web address.

Mr Shem, who was asked the website of NSCDC responded with confidence, “Yes, I cannot categorically tell you one now; because the one we are going to make use of is going to be made known by my oga at the top. Yes, I can’t announce one now and my oga says is another one” he added.

When further quizzed to state the organization’s official website not the one that had been used for employment racketeering by fraudsters, Mr Shem responded to the shock of the presenters and viewers at home: “You want to know about NSCDC,” he asked, “okay www.nscdc. so, errm, that’s all” he said.

Question is, did Mr Shem represent his organization well in the age of digital revolution or did he simply expose a lack of knowledge of latest technology tools that has come to be associated with most government establishments?