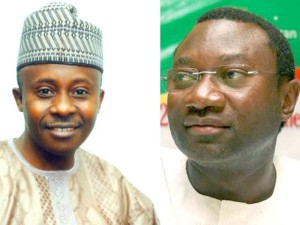 The hearing in the suit between oil mogul, Femi Otedola and the former Chairman of the House of Representatives Ad-hoc Committee on fuel subsidy probe, Farouk Lawan, has been postponed indefinitely.

Justice Peter Kekemeke of the Abuja high Court took the decision following an appeal that was lodged before the Abuja Division of the Court of Appeal by the embattled lawmaker.

Farouk had gone to the appellate court to challenge the jurisdiction of the high court to entertain the action which he said was incompetent and baseless.

In a motion for stay of action, his lawyer maintained that the trial judge erred in law when he assumed jurisdiction to hear the case despite separate preliminary objections that were filed both by himself and the Speaker of the House of Representatives, Aminu Tambuwal.