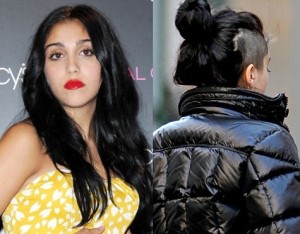 Should parents be allowed to shave off the young daughter’s hair?

That is the question people are asking after the 15-year-old daughter of Madonna, Lourdes Leon, was spotted with a radically different hairstyle. She was seen sporting a bun on top of her head, with shaved side parts.

Lourdes is not the only celebrity who recently shaved their head. Willow Smith, the 11-year-old daughter of the popular Will Smith and Jada Pinkett-Smith, recently shaved her entire head.

The Whip My Hair singer will have no hair in his sight to whip back and forth.

The new raging debate across the U.S. is, if children should be allowed to choose their own hair style even though they look terrible with that hair style, or no hair style for that matter.

Still many young children really have no say what their hair style should look like. Kids have their hair cut regularly usually chosen by their parents. As they grow older, children are usually allowed to start making their own decision on hair styles, with usually the first few being a disaster.

Madonna had no comment on her daughter’s hair style.