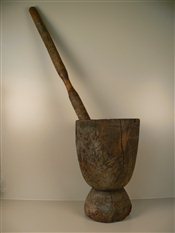 The killing of a retired soldier and his wife by their 32-year-old lunatic daughter left sympathizers in tears yesterday at Oleh, Isoko South Local Government Area of Delta State.

The retired Army Warrant Officer, Mr Jonah Elili, and his wife gave up the ghost after they were hit with a pestle by the daughter identified as Elo, sources say.

No one knew about their gruesome murder until a neighbour went to the deceased couple’s shop to buy some items when she found the lifeless bodies of the retired soldier, 75 and his wife, 65, were reportedly discovered in the early hours of yesterday.

According to a source, the neighbour had after knocking at their door for several minutes without response, peeped into the house and was shocked to find the husband and wife lying in a pool of blood.

The source said the woman scared by the gory sight, raised alarm which drew the attention of people in the neighbourhood. The last they knew or heard about the family was when the retired Warrant Officer came out to drag his daughter who ran outside naked, back into the house and locked her up, the source added.

The couple was blessed with seven children (two boys and five girls), including the one that was afflicted with insanity who the source said had been roaming about the community.

Elo had since been detained at the Oleh Police Station. She was alleged to have told detectives that she reportedly killed her parents because they hated her.

“My parents hate me. They locked me up in a room where they first hit me before I retaliated with a pestle. I saw blood and that is all I know,” Elo reportedly said.

Confirming the story, a senior Police officer in Oleh said a signal had been sent to the appropriate authority, and the matter would be transferred to the Delta state police headquarters in Asaba for further investigations.