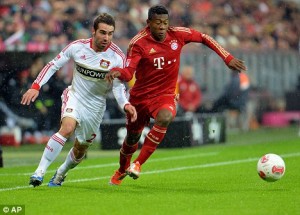 David Olatukunbo Alaba (born 24 June 1992 in Vienna) is an Austrian international footballer who plays for Bayern Munich. He has played a multitude of roles, including central midfield, right and left wing, but as of spring 2012 has blossomed as a left back, a role Bayern Munich coach Jupp Heynckes has stated he sees Alaba continuing in.

He grew through the ranks at Bayern Munich after joining from Austria Vienna in 2008, and established himself as a regular after a wonderful display in his first appearance for a DFB-Pokal game against SpVgg Greuther Fürth. Alaba came on in the 59th minute, replacing Christian Lell. After one minute on the pitch, and with his second touch of the game, he set up Franck Ribéry to give Bayern a 3–2 lead, in a match they went on to win 6–2. He also became Bayern’s youngest ever player in a competitive fixture, at 17 years, 7 months and 8 days old. At age 17 years, 8 months and 13 days, he made his UEFA Champions League debut against ACF Fiorentina on 9 March 2010.

This talented youngster was born in Vienna to a Filipino mother and a Nigerian father (a DJ and former rapper).

With the problems Nigeria had at the 2013 AFCON in the left back position of the Super Eagles, David could have been the ideal man to fill the void. 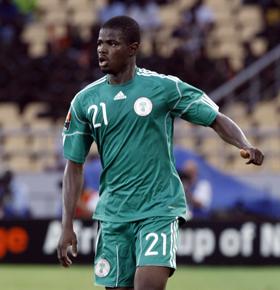 With due respect to Elderson Echejile who upped his game after a poor start at the 2013 African cup of Nations, AFCON, David Alaba would have been the perfect candidate for the left back role as Coach Stephen Keshi builds a generation of players that will put Nigeria back in its place as Africa’s football powerhouse.

Keshi has started well with the Super Eagles AFCON win, but I’m sure injecting more quality into the team is desirable, and the Nigerian coach will continue working towards achieving that.

But it’s so sad our son has appeared for another country, and he can no longer represent his fatherland.

Alaba was called up to the senior Austria national team for a match against France in October 2009. He made his debut in this game, making him the youngest player in the history of the national team. He scored his first goal for Austria on 16 October 2012 in a World Cup Qualifying game at home to Kazakhstan where Austria ran out 4–0 winners.

As far as the footballing world is concerned, David Alaba is an Austrian, but I can’t help but wonder how different things could have been if he was playing for the Super Eagles. I guess some things are just not meant to be; David Alaba will never play for Nigeria. 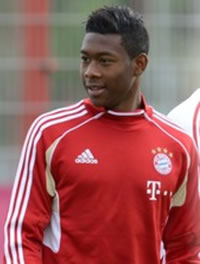