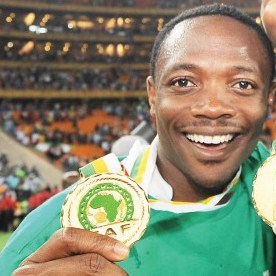 CSKA Moscow forward Ahmed Musa, who is in blistering form, has told Russian media the reasons behind the wild jubilation in the country following the Super Eagles’ triumph at the African Cup of Nations.

Speaking to Sport Express, Russia, the 20-year-old disclosed: “It was great happiness. And not only for players, but for the entire nation. The country was waiting for this for twenty years; the victory was the reason for a big celebration.”

Musa and fellow compatriot, Emmanuel Emenike of Spartak Moscow were in the victorious Super Eagles squad at the tourney in South Africa as team mates but right now, both players have gone back to being ‘rivals’; at least, in the words of Musa.

“During the tournament, we spent much time together, talking. But now we are back in Russia, again, we are rivals,” Musa said.

Musa, who has scored nine goals in 29 appearances for CSKA since completing a €10 million move from Dutch club side, VVV-Venlo in September 2012 is the third best forward in Russia.