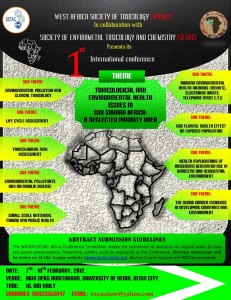 The West African Society of Toxicologists, WASOT, has warned against uncontrolled environmental pollution in the Niger Delta at its conference held the University of Port Harcourt, Rivers State, with the theme, “Global Understanding of Chemicals in Health, Diseases and Economics”.

At the conference which attracted over 200 experts, and held between February 20 and 23, 2013, the toxicologists tasked governments in the region to lead a revolution on affirmative action against increasing health hazards posed by environmental pollution in the area.

“We are being faced with a situation where our young girls and women are increasingly experiencing barrenness or having deformed or abnormal children when they are able to give birth,” WASOT said in the summary resolution adopted after the conference.

Prof. John Anetor, a Pathologist from the University of Ibadan, while speaking at the event said from birth to death, endless exposure to industrial emissions of mercury, cadmium, acids, and drugs as well as toxins from food and other natural agents cost man serious health repercussions of lethal consequences.

President of WASOT, Prof Orish Ebere, in his summation said the developing world was exceptionally vulnerable due to ineffective regulations and poor mitigating capacity.

“In Nigeria, it is even far grimmer for people living in the Niger Delta for obvious reasons of closer exposure to devastating pollutions from oil and gas operations,” he added.