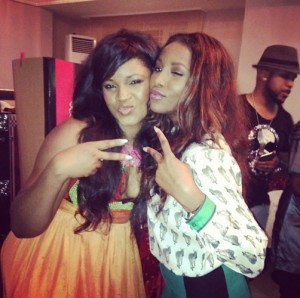 Fans of two of Nollywood’s biggest fishes; Omotola Jalade Ekeinde and Genevieve Nnaji, may lately be surprised that the two perceived arch rivals are now getting along with each other like never before.

Even though both actresses have denied being enemies before now, sources close to them have severally confirmed to Nigeriafilms.com that the two really don’t too get along with each other.

It is true that the duo have acted in movies as sisters more than any other ‘rivals’ or actresses in Nollywood, but sources maintained to us that they only get along when they are in front of cameras but always return to status quo immediately after they get behind the cameras.

But recently, the two have been publicly telling the world that they are best of friends.

First, it was at Ibinabo’s birthday held in Lagos in January. Also, at Omotola’s surprise birthday in March, they both got together. At the last AMVCA, Omosexy and Genny, as both are fondly called, got along and even made jest of each other.

The person behind all these is Ibinabo Fiberesima, the AGN president.

Our reliable source told us that Ibinabo has been instrumental in bringing these two heavyweights together. Like what she promised during her campaign period that she would unite Nollywood, our source said she has been working tirelessly to fulfil that promise.

“A reconciliation meeting was held where Ibinabo appealed to both Omotola and Genevieve to embrace each other as sisters and not as colleagues,” our source said.