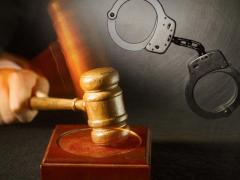 A 40-year-old farmer, who mixed local gin (aka Akpetseshi) with coca cola and gave it to his 13-year-old stepdaughter to drink before defiling her, was on Friday sentenced to seven years imprisonment by an Accra circuit court.

The court, presided over by Ms Sedina Agbemava, found him guilty after the trial and convicted him accordingly.

Prosecuting, Chief Inspector Johnson K. Anim, told the court that the complainant was Alex Benyah, the victim’s father. The victim’s mother is married to the convict and they all reside at New Aplaku, Accra.

Chief Inspector Anim said in October 2011, the victim travelled with the mother to their hometown. Later the victim returned to Accra alone because she had to attend school.

In the absence of her mother, prosecution said the convict took advantage and offered the victim Akpetseshi and coca cola to drink and she became intoxicated.

Chief Inspector Anim said the convict had sex with the victim and she bled profusely. Etuah then asked the victim not to tell anyone else she would die.

According to prosecution, since then, Etuah had been touching and fondling the victim’s breast when nobody was in sight.

On January 2, last year, the victim’s mother travelled and the convict had sex with the victim and, this time around, the victim developed an unbearable abdominal pain and, hence, could not walk.

Prosecution said the victim informed her father who led her to the police station to lodge a complaint.

The police issued a medical form to the victim for examination and treatment.

The medical form, endorsed by the Kasoa Government Hospital, confirmed that she had been defiled.