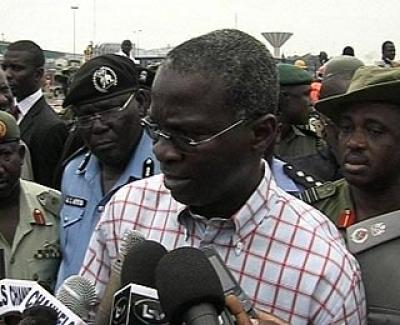 The Lagos State Government has denied reports alleging that Governor Babatunde Fashola ordered his police escorts to manhandle the driver and children of the Executive Director of the Social and Economic Rights Action Centre (SERAC) Felix Morka, during a traffic incident on Tuesday.

In a statement, the government spokesman, Hakeem Bello said “the premise and the content of the message are completely false.”

Explaining what transpired on that day, the statement said “On the aforementioned date, at around 3pm, the Governor was returning from a Security meeting at the headquarters of the State Security Service (SSS) through CMD Road in the Magodo area when his convoy and other road users got blocked by a man who had driven his Jeep with Registration number KU 549 KJA against the flow of traffic. The identity of the owner was later established to be Felix Morka.

“The gentleman in question had contravened a traffic law by vacating his own lane and driving against oncoming traffic. This had resulted in him blocking other road users, including the Governor’s convoy, from progressing on their journey. After about two minutes, in which the driver bluntly refused to reverse and move to his own side of the road as politely requested by the Police escorts, the Governor instructed his Aide-de-Camp to investigate what was going on.

“Mr. Felix Morka’s driver was immediately arrested by the Policemen. He was charged to court on Wednesday 27th March as is the norm for such traffic offences.

“At no point were the occupants of Mr. Felix Morka’s vehicle harassed or molested. Mr. Morka’s claim that his driver’s arrest was connected to his criticism of this administration is laughable. No one in the convoy knew who he was at the point the vehicle he was in was driven against the normal flow of traffic, the reasons for his driver’s arrest were due to a clear contravention of a well-known law. Further, photographic and video evidence are available which will be used in the prosecution.”