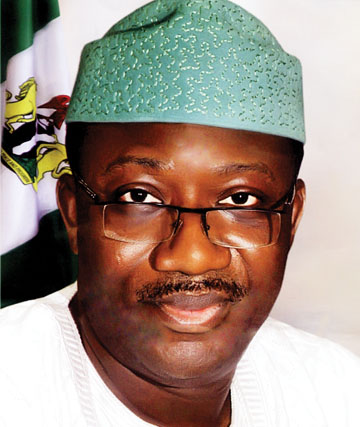 Governor Kayode Fayemi of Ekiti State has reiterated his administration’s resolve to reduce poverty to the barest minimum by sustaining payment of N5,000 stipend to indigent elderly citizens of the state; this, he said would eliminate poverty.
Fayemi who was speaking at a dinner hosted by the Igbimo Ure Ekiti, a non-partisan group of eminent Ekiti State indigenes, said despite the state’s low revenue profile, his social security scheme would be sustained and improved upon to take care of  indigent senior citizens of the state.
“Some ask what the N5000 we pay elderly people achieve. The scheme is part of a poverty reduction strategy which will cater for the indigent elderly and reassure them of their importance and usefulness in society. I once met an elderly woman who said she feels guilty for being paid for doing nothing. And then the amazing thing is that she said she doesn’t finish the money for the month before the next payment comes. The fact that there are people that can live on N5,000 for 30 days made me realise the level of poverty we are dealing with here, and we will constantly work to eliminate that,” he said.