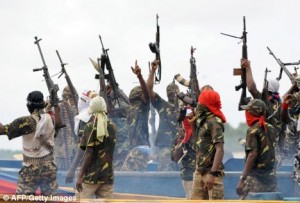 Former militants in the Niger Delta, who were not registered in the extended Federal Government amnesty programme, yesterday, gave a seven-day ultimatum to be absorbed in the programme, warning that they would no longer guarantee the security of oil installations if the government failed to register them.

The aggrieved ex-militants released a statement in Yenagoa, Bayelsa State by ‘General’ Inami David, said they deserved to be documented and registered, having surrendered their arms.

He noted that their expectations were dashed by the Federal Government team which carried out the verification and documentation exercise.

He said the team that carried out the exercise at the Sector 2 Command Headquarters of the Joint Task Force in Yenagoa, was biased.

He accused its members of placing some camps ahead of others.

He said: “We the aggrieved persons in the just concluded verification and documentation exercise are giving the Federal Government seven days to contact us and include us in the amnesty programme.

“Unless this happens, we will have no option but to resort to other means to get our grievances addressed, which will be of dire consequences to the Federal Government.”[Vanguard]