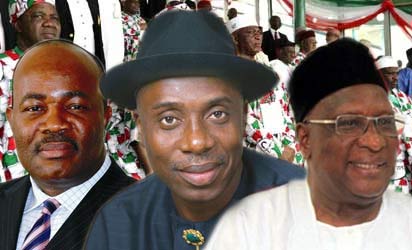 There are strong indications that some governors under the aegis, the Nigeria Governors’ Forum, will move to curtail the excesses of the newly elected Chairman of Peoples Democratic Party Governors’ Forum and governor of Akwa Ibom State, Chief Godswill Akpabio over his recent utterances.

It will be recalled that governor Akpabio during his visit to the PDP National Chairman, Alhaji Bamanga Tukur last week Tuesday soon after he became the first Chairman of the new association, was quoted to have likened the crisis in the ruling party to the handiwork of some ‘Judases’ whom he said his mission was “to try to identify the ones they called Judas and whisper it to them and say go out, the train is moving and you cannot stand otherwise we will crush you.”

It was gathered yesterday that some of the governors will meet in Abuja on Wednesday at a neutral ground primarily to fashion out how appropriately to respond to the new chairman of PDP governors’ forum.

The governors are reportedly of the opinion that Akpabio was just one of them and that even if the Chairman of Nigeria Governors’ Forum, NGF and governor of Rivers State, Chibuike Amaechi was removed as chairman in May, the forum will be galvanized to be more united than ever.