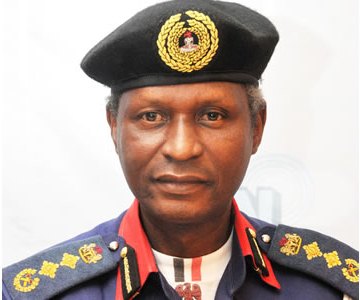 Commandant General of the Nigeria Security and Civil Defence Corps, NSCDC, Dr Ade Abolurin has charged officers and men of the corps to shun corruption.

Dr Abolurin who spoke yesterday at the National Cooperative Summit of the Corps in Abuja, gave instances of how corrupt persons attempted to induce him with money.

He said: “Some people came and met me and said they wanted to supply us laptops and I said if the laptops would be highly affordable, then I will not have any problem with their proposal.

When they were about leaving, they offered N10 million and I asked ‘for what?’ They just said ‘it’s appreciation.’ I told them instead of giving me that money, they should use it to subsidize the laptops that they wanted to supply.

“Two days after, they came again and said ‘Oga, sorry o, it’s like we did not understand you very well before.’

“They doubled the money and immediately, I walked them out with a firm threat to arrest them if they came close to my office again.”

In another instance, Dr Abolurin revealed that “Some people also came to me and invited me for a dinner in Sheraton.

“They said they wanted to build houses for the corps and I asked them if the houses will be affordable”, he said, adding that at the dinner, the group also made attempts to bribe him but he threatened to arrest them if not for the pleas by some top Nigerians.

While charging officers of the corps to shun corruption, Abolurin said it is only by so doing that they can face the authority and speak truth to it.