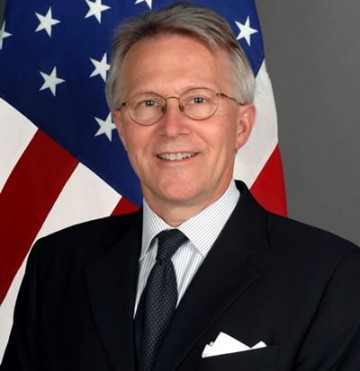 United States Ambassador to Nigeria, Terence McCulley, has said the Nigerian government should adopt a multi-pronged approach in dealing with Boko Haram insurgency.

McCulley said this on Thursday, during a telephone conference call with journalists from four locations in West Africa.

On the military action in Mali and its attendant effect on the Boko Haram insurgency, the envoy said, “The Boko Haram phenomenon has not stopped as a result of the operation going on in northern Mali. I do believe that Nigerians feel that there is a link between extremist activity in the Sahel and in their internal extremist insurgency.

“The government of Nigeria clearly needs to address this issue with what we call a multi-pronged approach that focuses generally on the security threat that Boko Haram represents. Also, in addressing economic and social conditions that exist in the North, communicating to northern populations, who have suffered most from the deprivations of these extremist attacks.”

McCulley also confirmed the link between insurgents in Mali and Nigeria’s Boko Haram, as he said, “We have seen reports for years about Boko Haram members travelling to Northern Mali for training and then returning to Nigeria.”

He further explained that the US was not contemplating the deployment of its troops in the troubled West African nation.