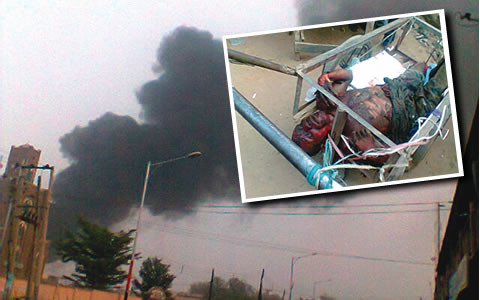 Witnesses have recounted how a suicide bomber targeting luxury buses full of passengers detonated a car bomb at a busy motor park in Kano yesterday, killing dozens of people and injuring many others.

The blasts which happened along New Road in Sabon Gari, occurred shortly after 5pm when luxury buses that were preparing to travel to other parts of the country were hit by the explosions and were destroyed in the process.

Survivors narrated how a suicide bomber drove a Volkswagen Golf car into the motor park meant for passengers traveling to the southern part of the country and rammed into a Lagos-bound bus which was driving out of the park with scores of passengers on board.

The resulting impact led to a loud bang while the vehicles exploded setting fire to others within the vicinity. There were however reports of a second explosion soon after the first one.

Witnesses said many passengers, park attendants and hawkers were caught in the explosions and were burnt beyond recognition, while many others sustained various degrees of injuries.

There are conflicting figures of the dead but some witnesses put the number at around 60.