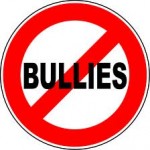 How would you know if a child is being bullied? How do bullies target?

Normally any child that doesn’t show ‘domineering behaviour or aggressive tendencies’ are a target for a bully, since all bullies are fragile and disturbed themselves.  Any person that stands out as a possible ‘defender’ or an outspoken person opposing the bully would definitely not be a target for them.

One of my friends son’s whilst  at primary school, was constantly found under different classroom tables during school morning or lunch break-times.  She would constantly get phone calls from school reporting her sons ‘odd’ behaviour and his self imposed alienation from others.  At home he was boisterous and lots of fun with his family, but daily the school would phone.  It was after she started seeing marks on his body that she investigated further; he was a victim of elementary school bullies who took pleasure of beating on him during school!

You may ask your child religiously, just like she did, “How was your day Angel?” The trend is every day is always “fine”. “Oh, But how did you get your cut knee? Well, I fell playing football or It, happened whilst playing ball outside the house.”

All the asking of  your child’s well-being from them will not necessarily disclose the hard facts.  Do not indulge in  self-blame:   “It’s all my fault!”  ”Why didn’t I know?”  ”How could I not know?”  Bullies are known to threaten their target if they disclose to anyone what is going on.

You may start blaming others : “The teachers should have  helped my son?”  ”His  friends never said anything?” “Why aren’t the school particular about  keeping to their ‘anti-bullying’ policy?”

Children usually won’t confide in their parents about bullying, I’m no psychiatrist (just a parent of a child that had been bullied because of his ‘extra needs)’.   I was lucky as my child told me within a few days of it starting.  It was swiftly nipped in the bud and the school was responsive (it also helped that I was a parent helper in the school) so the bully and his family were called in for a meeting.  Had I not been open to my child telling me anything or a volunteer in the school, I cannot say what the outcome would have been.

As a parent, religious establishment or childcare provider, try to  instil: Anti bulling programs, feel free to tell me anything at all (an open door policy).  Also, and very important; let a child know if they see it happening to others; tell someone!

Choose for your child a school, Sunday school or religious establishment that has and teaches character building in your child. Bullies   can do lifelong harm if they are allowed to continue beating down a child’s spirit.

Remember also, there is a newer manifestation to the ‘playground bullying’  called ‘On-line bullying.’

Our children will be of strong character and make a change in this world, ALWAYS!