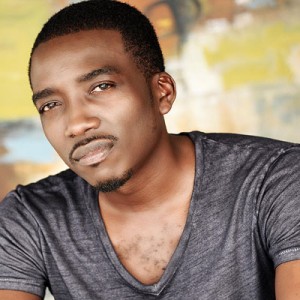 The Theatre Arts graduate from the Delta State University describes himself as an all-round entertainer. He says, “When people ask me what I do, I say I am an entertainer. I am an actor, writer and a comedian. I produce my own TV show as well and I am going into films soon. Everything I have been writing, I keep for myself except for a few.

Bovi, who was once a personal assistant to Richard Mofe-Damijo, explains how he grew under the wings of the Nollywood actor.

“Interestingly, I met him in a rather unusual way. I wanted to sell a movie script and I went to his office. I was trying to convince him to buy when he showed me more than 30 scripts lying fallow in his office.  Somehow, we bonded and he offered me the job of a personal assistant, which I accepted on the spot. He taught me the business side of entertainment. It was in his office I learnt how to write proposals, meet clients and branding. We are still very close and he is more or less my father.”

On his ‘one man show’ which held recently to critical acclaim, Bovi says, “I think every comedian deserves an opportunity to entertain his audience at a full stretch. The norm in the industry now is that people host shows and feature so many artistes. In as much as it is a good thing, a comedian should be able to hold the attention of his audience for as long as possible.  One-man shows are not common in this part of the world but I pulled it off successfully.

“I draw content from social happenings, both past and present. I do a lot of satire. I pick on a particular issue and try to make light of it while still passing a very strong message,” Bovi says on how he gets inspiration.

Speaking on the practice among comdeians where the same jokes are recycled all over, Bovi says it is only a matter of time. “There is a lot of recycling going on in the industry. There are jokes that are famous and we have seen up to eight people, tell the same joke. As a result, in most cases, people cannot tell who the originator of the joke is and comedians hide under that guise to repeat the joke during their performances. It is a matter of time before the practice is curbed but luckily, people hardly tell my jokes. I do not have an issue with people telling my jokes at private gigs, but it becomes an issue is when it is recorded to be broadcast.”

Bovi, not surprisingly, picks Basketmouth and Alibaba as his role models. He says, “I learn one or two things from different comedians including the up and coming. Basketmouth is my very good friend and he is one of the few people who saw what I was capable of before the world saw it. He gave me a lot of gigs and we think alike. We have our differences, we argue but our connection is very brotherly.

“Alibaba is another person I respect; he was the one who told me I had the talent to do stand-up comedy.”

On who he sees as his competitor in the industry, Bovi sees only one person – himself!

“I am my greatest competitor and I have always held my own. I am not even threatened by emerging competition because I think its better we have these people come on board instead of engaging in some illegal venture. Even if stand-up comedy does not work for them, they might through trial and error discover something else that will work for them. Almost everything in Nigeria has a bandwagon effect but the industry will filter itself.”