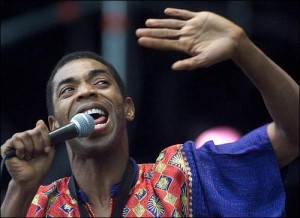 There are artistes who only got noticed because of a popular parent, but for Femi Kuti, whatever he has achieved today, he has worked hard for it. His father’s influence was key though, but Femi deserves everything he has in music today.

“Afro beat can never die, maybe in Nigeria, but in America, there are over forty to fifty bands; in New York alone there are over 20 bands; it exists in Japan, Australia, San Francisco and other parts of the world. So when you think that afro beat is dying in Nigeria, in other parts of the world, it is becoming bigger and more popular,” Kuti told Vanguard. 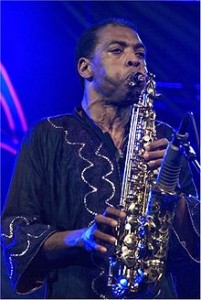 “It does not matter where it originated from, we are all from the same planet, and I am not going to get caught in the foolishness of being a Nigerian. I am not a Nigerian, I am an African. When you understand the history of Nigeria, Nigeria is a colonial structure set in motion by Lady Lugard. So Nigeria is not our name. When you understand the history of Africa, then you will not be foolish to fall into the category of calling yourself a Nigerian. I am an African, because you understand that Africa was divided 1885. When you look at it from that perspective, you will understand that people appreciate the talents that come out from this part of the world,” Kuti said

“If young Nigerian artistes are not playing afro beat and Americans are playing afro beat, then we need to ask ourselves the question why? Do you know what it takes to compose an afro beat number? Nigerian artiste won’t play afro beat because it is too difficult to play. The foundation of afro beat is based on emancipation of Africa, fighting against corruption and injustice; this is the uniqueness of afro beat, the truthfulness in the music, like what Bob Marley did with reggae. The difference is that Afro beat is deeper than reggae. So the diehard Fela fan want to see a replica of that. So for you to come out of that stereotype criticism, you will go through hell. I went through hell. Breaking out of my father nest was not easy. So I don’t expect, even for my son to break out of his grandfather or my nest, he is going to do something extra ordinary. But then you will look at it from the critical point that shows the uniqueness of the music and you have to be so talented and gifted.

“Anybody can do what is going on in the music scene. The biggest dullard can create a hit. All you need is a catching phase, it has become a hit, it is entertaining. When you now want to be critical of it, you will find that it is the kind of music you will laugh at and make fun of, it is not classical music or jazz,” Femi Kuti noted.

The artist who plays the saxophone with finesse is obviously sad about the state of the non-existent Nigerian music industry as he decries the way it’s being run, and the fact that artistes don’t take time to learn what they should. His preference would be Jazz and classical music anytime; he calls them real music.

“All the films you watch what are you hearing at the back ground are classical music. Do you take time out to ask yourself who composed or wrote the music? So the people making money, serious money in the entertainment industry music, you don’t hear their names. You only hear the names of Michael Jackson, but when you go into a Michael Jackson, you find out he doesn’t write his songs. How many people know Quincy Jones? He was the one that made Michael Jackson, he was the one that wrote the Thriller. So these are things that many people don’t know. So when I say we don’t have an industry, I know what I’m saying. We just want to eat the cherry of the industry. So there is so much that goes on and you have to go through years of training before you become a fantastic force to be reckoned with in classical music or jazz.”

Kim Kardashian recently made a cameo appearance at Darey’s show, Love Like A Movie, and she was reportedly paid $500K. Femi Kuti wonders why foreign artists are brought into Nigeria and are paid huge sums catered for by expensive tickets. He says tickets can’t be as expensive abroad.

“I will give you an insight into my career again, because I travel out and people think I must be a multi-millionaire. How do you rate some someone a multi-millionaire because he is traveling? I buy tickets for this band; I must pay salary, pay internal flight and transportation, now the venue there, you are not going to get more than a thousand people. It is not Nigeria where you charge people up to N25, 000 to watch a show; you cannot charge that outside the country. It is disgusting when you bring an American artiste from America and you are charging this kind of fee, because the maximum you will charge in America is thirty dollars. And if it is a big artiste, you put it in the stadium.”

A member of the panel of judges for the current edition of Nigerian Idol, Femi Kuti who had been impressed by the talents so far, spoke without mincing words, the failings of the show, and made recommendations for better shows in the future.

“It is called the Nigerian Idol; I hope in the future, it will be more African in its presentation, focusing on African hit songs or Nigerian hits. So if we are singing Whitney’s songs as a hit, of what good is it to us as a people? But if we are singing our hit songs irrespective of the artiste in Africa, we would be promoting the artiste and our culture in Nigeria and Africa to the world, because Nigerian Idol is shown all over the world. Nigerian Idol should be more African than American.”

Kuti believes there are no two ways to improving the show than making it more African. “By insisting that Nigeria or Africa songs are part of it, because I think that contestant feel that if they don’t sing one of the America hit songs they will not win. For instance when sing Fela’s song, they think they have to sing it like Fela did, or demonstrate like Fela, so the attitude already is wrong. But if you can sing the song better than Fela Anikulapo Kuti sing it, if you can sing better than a bob Marley sing it. The judges are looking for the unique voice texture. The talent show is just three years in the making, I think by its fifth or sixth year, it will change and contestant will know that they have the ability of singing a Nigerian hit song and still qualify to any stage of the competition. People have to feel confident to sing African songs. I noticed this time around that many of the contestants were singing either P square or D banj it is just that majority still sing America. By the time we get to the final six or so, the contest says the contestant must sing an African song to qualify.”

Femi says stakeholders in the Nigerian Music industry have to put the right structures in place; “We need to build solid foundation for generations to come, because what we are seeing in a country like Nigeria, with a hundred and eighty million people, we are going to have a big problem if these structures are not put in place.”