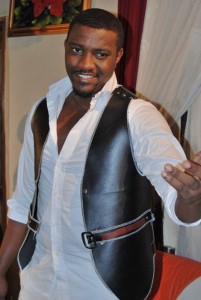 Ghollywood handsome actor, John Dumelo in a recent interview, opened up about his relationship with the opposite sex, his girlfriend, and why he is still single.

According to him, he has endured more than the average number of disappointments that men his age go through.

Five times I’ve had my heart broken since I started dating and none had been my fault. The ladies either ask me to stop acting because they can’t stand seeing me play romantic roles on screen or they complain that I have too many female friends which make them uncomfortable.

I cannot tell which lady is real or fake, who has good intentions for me and who has not. So I am being very careful this time around.

Because of my popularity, ladies can pretend they are soul mates and later show me their true colours when we finally settle down in marriage and that is what I want to prevent. I want a woman who will love me for who I am and not what I am.

I would go for beautiful woman who is well endowed in the bust region and who must also be intelligent.

John said that although he is seeing someone currently, they are yet to decide on compatibility but he hopes she is the right one after all.

I am growing and need to settle down very soon, so it will take me a very long time to settle on another lady if this relationship doesn’t work out. Even though I haven’t known her for long, I hope and pray she is the right one.

Are you his kind of woman?