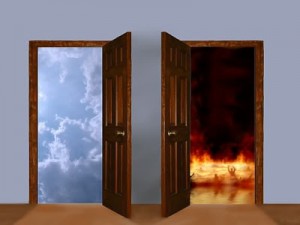 I decide to share this controversial “revelation” for one simple reason:

While I was growing up in Port-Harcourt, a Pastor with spiritual gift made some very worrisome exposé about one of the late Pastor’s that was mentioned in this latest revelation. What was said about his “secret dealings” has troubled my heart for many years because I know the Pastor who made the exposé personally. He is not one who talks anyhow.

PLEASE READ THE SCARY REVELATIONS BELOW…..

In an interview a man identified as Brother Sadiq, who was allegedly shown hell after a forty day fasting said “The Lord said ‘come with me’ and the next thing I saw is that we were walking together in hell. When we got to hell, the Lord said to me, ‘this is the place you wanted to see, don’t be afraid because of who I will allow you to see, and what I will show you’

“While I was talking with him, I also saw a woman who was a very popular female preacher from Nigeria – She introduced herself saying, “See me, see me, see me, Bimbo Odukoya,” but I was not allowed to talk to her but she was allowed to talk to me. She said what brought her there was secret sin, though she did not state what the secret sin was. The Lord made it clear that it was iniquity that took her there…

THE VISIONWhat did Brother Sadiq see?After a forty-day fast that I was requested to go through by the Lord, in the place of prayer, I suddenly saw light around me and then heard the audible voice of the Lord saying, “Men have seen the sky, the sun, moon and stars, the mountains and the hills and yet they fear Me not; I will not hold My peace anymore, I am coming to judge the earth.”
MY GOING DOWN INTO HELLWhen the Lord told me that the people in destruction are going to hell except they repent, then I asked the Lord “Can I see the place?” He said “Yes, you can see hell because you asked in a right way”.The Lord said “Come with me” and the next thing I saw is that we were walking together in hell. When we got to hell, the Lord said to me, “This is the place you wanted to see, don’t be afraid because of who I will allow you to see, and what I will show you.” The place was very terrible. It was dark and I could hear screams of billions upon billions of people, men and women. Though the place was dark, I could still see because the light of God was shining. His face was shining like the sun in its strength. I saw the flames of fire looking reddish and multitudes of people as though they were swimming in the fire. The people I was allowed to speak to were in their individual pits of fire. These pits of fire are literally billions upon billions! They would try to come out of the pit, but it was as if the fire would melt them. I saw billions upon billions of demons running around. These demons were more or less making mockery of those there.
The Lord said “I will allow you to talk with three men who were top preachers from your country but are now in hell.”These are people I never met or knew on earth. Each of these men introduced himself to me and acknowledged that he deserved to be there in hell.
The first person I talked with was Archbishop Benson Idahosa(Church of God Mission International).
When I saw his state of suffering in hell, then I asked him some questions.
Q. Why are you here?
A. Covetousness and I was full of self-righteousness while I was on earth. And I deserve to be here.
Q. Are you used to the pains and the suffering?
A. No. The suffering is new every day.
Q. For how long have you been here?
A. Thirteen (13) years
Q. What if I want to come here where you are?
A. If you want to, you are welcome.
While I was talking with him his flesh would melt as if acid was poured on his face. All the time he was talking with me, he was in torment in his own pit of fire.
The next person I talked with was Baba Paul Gindiri (New Life for All). While he was looking at me, he was screaming in his own pit of fire. As he would try to talk, fire would come from his mouth melting his throat. Then the throat came back again and he was able to talk with me. As he was talking there was fire burning even inside his head and he was in real torment.
Q. Why are you here?
A. My works brought me here
Q. What works?
A. Guile (deceit, hypocrisy, falsehood)
Q. But I was touched by some of your messages I have listened to, yet you are here. Is your message that we are listening to also going to bring us here?
A. No
Q. Why?
A. If you allow the Spirit of the Lord to lead you and not your human mind, your life will glorify God through the messages.
The next person I spoke with was Pastor Philip Mokungah (Oasis Church, Plateau state). He was talking with me with his head upside down. The Lord says that was the state of his punishment at that hour.
Q. Who are you and why are you here?
A. I was Pastor Philip Mokungah. Now I know I am nothing and myself-will brought me here. And I’ve already sowed the seed of self-will and selfish desire in my family. The more it grows the more my punishment in hell increases. I was walking right with God then I gave room to the devil and he cut me off. He succeeded through my desire and at the end I divorced my wife. This was the first step that separated me from God. And I took it very lightly. Now I am here as a result of my self-will.
He also gave me a message for his family.
While I was talking with him, I also saw a woman who was a very popular female preacher from Nigeria – She introduced herself saying, “See me, see me, see me, Bimbo Odukoya,” but I was not allowed to talk to her but she was allowed to talk to me. She said what brought her there was secret sin, though she did not state what the secret sin was. The Lord made it clear that it was iniquity that took her there.
Ten other people spoke to me but I was not allowed by the Lord to speak to them. Eight of them are of other nationalities (Non-Nigerians).

THE TIME IS AT HAND.
MEN MUST BOW TO WORSHIP THE KING – JESUS!AND THEN ARISE TO ESTABLISH HIS KINGDOM WHERE WE LIVE AND WORK!MAY WE BE FOUND RAPTURE- READY!
This testimony can be reproduced with permission.Contact the author – Bro. Sadiq Ibrahim: +234-8038411672 Or Bro. Kelvin Stewart : +234-8037258581
NOTE ESPECIALLYWhatever questions you have from this mini-book, the Lord wants you to ask Him first.
John 10:27-28:
“My sheep hear My voice, and I know them, and they follow Me.  And I give them eternal life, and they shall never perish; neither shall anyone snatch them out of My hand.”Jesus said,
Mark 9:43-50:
“If your hand causes you to sin, cut it off. It is better for you to enter into life maimed, rather than having two hands, to go to hell, into the fire that shall never be quenched —   where their worm does not die and the fire is not quenched.’
And if your foot causes you to sin, cut it off. It is better for you to enter life lame, rather than having two feet, to be cast into hell, into the fire that shall never be quenched —   wheretheir worm does not die and the fire is not quenched.’
And if your eye causes you to sin, pluck it out. It is better for you to enter the kingdom of God with one eye, rather than having two eyes, to be cast into hell fire —   where their worm does not die and the fire is not quenched.’
For everyone will be seasoned with fire, and every sacrifice will be seasoned with salt.  Salt is good, but if the salt loses its flavor, how will you season it? Have salt in yourselves, and have peace with one another.”
ConclusionAs you have read this book, dear friend, if you have not given your life to Christ and you desire to do so from your heart please pray the prayer below. Also, if you have just been a religious person, just going to church but you know you have no relationship with Christ as your head or you are a backslider. If you desire that Christ give you a pure life now you have a divine opportunity. Truly you are making the greatest decision in your life.
The End* I would like you to pray this prayer right away, if you want Jesus to come into your heart:
Heavenly Father, I come to You admitting that I am a sinner (Romans 3:23). Right now I choose to turn away from sin, and I ask you to cleanse me, by Your blood, of all unrighteousness. I believe that Your Son, Jesus, died on the cross to take away all my sins.
I also believe that He rose again from the dead so that I may be justified and made righteous through faith in Him (Romans 6:23). I call upon the name of Jesus Christ, to be the Savior and Lord of my life (Acts 2:21). Dear Lord, I choose to follow You, and I ask that you fill me with the power of the Holy Spirit (Luke 11:3).
I hereby renounce the power of Satan and sin over my life, declaring that I am now a born-again child of God (Romans 10:9-10). I am free from sin and full of the righteousness of God, in Jesus’ name I pray, Amen.
If you just prayed this prayer by faith, the Word of God has promised that you are now BORN AGAIN! (II Corinthians 5:17). Welcome to the Kingdom of God! Now you have brothers and sisters all around the world. This is the most important decision that you have ever made. Take full advantage of it. Don’t go back into the world. The world leads to death, but the fear of God leads to eternal life. At each moment you need to live like it is the last day, and the last time of your life.