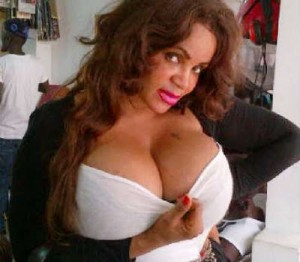 In a recent  interview,Cossy talks about her kind of man and what she expects from him

Do you have a boy friend?
That is personal. It is not for public consumption.

So when are you planning to get married?I cannot marry myself. When I get a proposal then I will consider it. For now, nobody has proposed to me. I am still waiting for the right guy. Whoever he is should come along with a diamond ring. You never can tell.

But it was rumoured that you had a romantic affair with one of the Super Eagles stars who planned to take you to the altar, what happened to the relationship?
There is no iota of truth in that story. The most annoying part was that they said the footballer bought a house and car for me and now I want to change my car. How can they say somebody bought a car for me when there is no car. I wish I will drag the footballer to the car showroom so that he can buy me a new car. Honestly, there is nothing like that. I am not that close to these footballers.

Who is your favourite Nigerian footballer?
(smiles)I don’t want to mention names. Whenever I am watching a football match instead of enjoying the game I derive joy in watching how the players’ ‘thing’ dangle in their shorts and their muscles too. It’s romantic indeed. It trips me and you know what it means and the consequence…

Which of the Nigerian players have you watched in action that tripped you?
Okay here you come again. I won’t mention his name but I can give you a clue by mentioning the name of his club if you insist.

So what is the name of the club?
It’s Chelsea.

Is it Mikel Obi?
I think you should be talking about Mikel Obi.You might be absolutely correct. I will say yes if you think you guessed right.

What do you like about Mikel?
He is a cool and handsome dude, you know. During the Nations Cup which Nigeria won he emerged as one of the sexiest footballers in South Africa.

So you are tripping for him?
I have said enough so it is left for you to sort it out.

Have you ever met Mikel one on one before?
I have not, but I am looking forward to meeting him on a good day

Your teeming fans will be interested in knowing why you like flaunting your breasts in the public?
It depends on my mood. I don’t do that all the time. Tell me the truth if you have noticed it hanging out since you have been around? I feel good flaunting it when I am partying. Sometimes I just feel like being naughty. It’s not a crime. My album is entitled Nutty Queen, so once in a while I feel like going crazy.

A lot of people are of the opinion that your boobs are not natural, can you use this opportunity to clear the air?
I don’t owe anybody any explanation for having big boobs, at the same time people should not be deceived. My boobs are natural. It is a gift from God. I inherited it from my grand mother because she has very big boobs. My mum has big boobs too but it is not as big as that of my grand mother.

Why are you always controversial on Twitter?
Twitter is my personal page hence whatever I say there is nobody’s business. Anything I tweet there is my cup of tea. It’s people who go there that makes so much noise about nothing.

How true is the story that you sacked your ex-boy friend because he failed to buy aRange Rover Sport for you on your birthday?
It’s true but that was a long time ago. He just called me one day and said “Baby, I’m getting you a Range.” Sometimes I wonder why some men make promises they know they won’t fulfil. Perhaps they want to show they belong when they know they don’t belong. It does not make sense. I would have reasoned with him if he had come to say “Sweet heart, look I don’t have that kind of money to buy a Range. I was just joking about it. Please I am sorry.” We would have continued the affair, but making it seem as if he was making issues out of it was being too childish. I did not sack him, rather he sacked himself.

What would you like to change about yourself assuming God decides to give you an opportunity to do so?
Forever young. I feel 16 year-old in my mind. Age is a thing of the mind and if I keep on reasoning that way I will remain forever young. The body must get old physically but mentally and spiritually, I am forever young.

We gathered that your parents have disowned you as their daughter, what happened?
My dad and mum have reacted to that story. Few weeks ago they granted an interview to the press threatening to sue those behind the story. I heard about the story too but “na them get their mouth.” I am close to my parents and they are proud of me. There was never a time they disowned me. I love my dad and mum and they love me too.