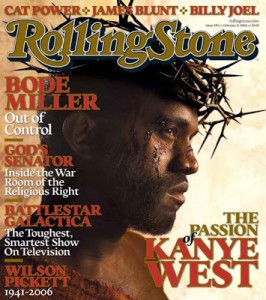 Kanye West is known for making shocking and controversial headlines with the decisions he makes, but if this rumor is true and Kanye West goes through with it, this could take the cake for the most controversial thing he has done so far in his career.

According to BBC in an article about what Kanye West and Kim Kardashian might name their first born child, it was revealed that Kanye is contemplating naming his upcoming album I Am God.

Mixed emotions greet reports that Kanye West is considering calling his first child North. It’s a good joke, from a slightly unexpected source (neither the rapper nor his possibly even more famous partner, Kim Kardashian, are best known for their self-deprecating sallies, although the title Kanye is supposed to be contemplating for his new album, I Am God, is said to be “half tongue-in-cheek”).

Kanye West made headlines back in 2006 when he appeared on the cover of Rolling Stone wearing a crown of thorns, covered in blood dressed as Jesus Christ on the cross. That was controversial at the time, but this just might one up that.

If Kanye really titles his new album I Am God, people will surely react to it. Religious buffs, Fox News and Illuminati conspiracy theorists would have a ball. Make no mistake about it.