In another example of how similar the North Korean government is to your nagging Great Aunt Betty, the country’s ruling party is saying that fashion forward hair is a big no-no.

These images from a hair salon inside the notoriously secretive country show a menu of 28 state sanctioned styles — 18 for women and 10 for men. The North Korean government thinks these styles are “most comfortable” and able to guard against the “corrupting effects of capitalism,” according to wantchinatimes.com, an English website run by the China Times News Group. 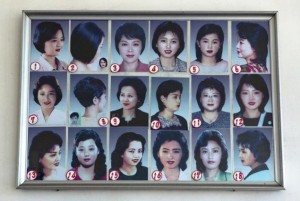 Some cuts are stately, others illustrate a certain nostalgia for the 1980s, while a few surprises are also thrown in. (Can you see Rihanna pulling off #2?)

Men can choose from 10 short hairstyles.

All steer far away from any shocking examples of Western decadence.

Mullet? No way. Mohawk? Don’t even think about it. Faux hawk? Leave it to Beckham.

Married women are allowed more leeway in their hair choices than single woman.

The situation for men is a bit more dire. Young men’s hair must be less than 2 inches long. They’re required to visit the barber every 15 days. The government believes that long hair draws nutrition away from the brain. Older men are allowed to grow their hair up to 2.8 inches. Spiky hair is vigorously banned.

It is unclear what choices are available to balding men or babies.

This isn’t the first time North Korea has launched an all-out assault on flamboyant hair. In 2005, Pyongyang televison aired a series entitled “Let us trim our hair in accordance with socialist lifestyle,” urging North Korean men to clean up any shaggy dos.

Dictator Kim Jong-un, a.k.a. the sexiest man alive, seems to have found a middle ground. But his trademark half-buzz, half-mop might be hard to replicate