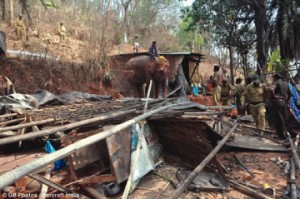 Now these guys are eviction officers you really wouldn’t want to argue with. In most countries, removing squatters or clearing illegal traveller sites is a slow process, mired in red tape and held up by endless legal proceedings. But in India they appear to have a developed a more direct solution.

At first glance, the elephants look like they are running amok destroying property but they are actually part of an elite squad used by Indian officials to clear forest land of illegal residents.

The jumbos are hired from local owners before being put to work bulldozing shack-like homes that dot the Assam region in north-east India.

Dr. R D Tanwar, chief conservator for forests, said, “The hilly terrain of the region makes it impossible for bulldozers or any large demolition vehicles to enter the region. And if we send in human demolition squads, people chase them away. We hire elephants from local mahouts to demolish the huts as they are the only sensible way in the hilly region.”

The region has hundreds of elephants which were used in the lucrative timber trade, which has since been banned.

“There are more than a thousand domesticated elephants in the region,” Animesh Prabat, a local resident in Ghandi Mandap Hills where the latest evictions took place, said.

He added, “Earlier, they used to carry timber in the mountainous regions, but ever since they have been banned from doing so their owners have put them out to rent. They are often used by people during marriages and weddings and other social functions.”

But animal welfare organisations have been up in arms against the forest department’s decision to use the endangered animal.

PETA India, CEO, Poorva Joshipura said, “The use of elephants to tear down illegal structures has always been and remains a ‘dumbo’ move.

“Forcing these animals to ram into concrete and iron is a violation of Section 11 of the Prevention of Cruelty to Animals Act and shows a total disregard for the welfare of our nation’s heritage animal.”

He added, “The government focus should not only be on protecting forests, but also the animals who reside in it, by ensuring they are not deliberately forced into acts that would cause them injury, distress and pain.”