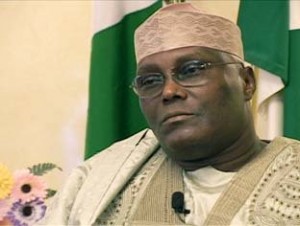 Former vice president, Alhaji Atiku Abubakar, has dismissed rumors that there would not be elections in the north in 2015 as a result of the security situation in that part of the country.

The former vice-president, who faulted a statement credited to a commissioner of the Independent Electoral Commission (INEC) to the effect that “there would be no election in the North in 2015 on account of the security challenges,” said it was an inaccurate statement.

In Atiku Abubakar’s words: “Again, all these talks that there would be no election in the North on the account of Boko Haram insurgency is rubbish. I disagree with INEC on this issue,” he said.

He also spoke on the allegation that INEC and some PDP stalwarts were working to thwart the successful registration of the All Progressives Congress (APC), adding that “a private investigation exonerated him from the allegation.”