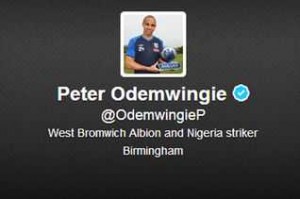 It’s such a sad sight to see the player who brought so much joy to Albion fans quickly turn from hero to Public Enemy No.1.

The Baggies’ most celebrated achievements in recent years have been largely down to Peter Odemwingie – the man Albion fans now love to hate.

I’m not going to argue with any supporter for venting their anger at the Nigerian for the way he has conducted himself in recent times.

But what I will say is, it is still important to remember the good times that the ‘old Peter’ produced.

And without sounding like I’m reading off the once-adored striker’s Twitter feed, there were plenty of them.

Not only did he single-handedly keep Albion in the Premier League in 2010-11 – the long-term effect of those goals is still paying off today.

Odemwingie was the man who helped the club lose its ‘yo-yo’ tag – his back-to-back seasons of double figures built the platform for the success they are now enjoying.

Then there were the local derbies.

In nine games against Wolves, Villa and Blues combined, the 31-year-old has hit seven goals.

He set the standard very early in his Albion career by inspiring his new side to a 3-1 victory over Blues in just his third Hawthorns appearance.

Odemwingie then helped Albion take the early steps towards becoming kings of the West Midlands.

More than a quarter of a century had passed without a league win over Villa until April 30, 2011, when that man again proved pivotal.

But it was his hat-trick against Wolves last season that is undoubtedly his greatest ever day in a blue and white shirt.

Three goals earned him the match ball in a 5-1 victory, which saw drastic consequences follow for their bitter rivals.

Albion fans should think back to that day when sending their next abusive 140-character message in his direction.

It’s true he has brought embarrassment to the club where he was once idolised.

And, yes, he does deserve some of the criticism.

But I could list a line of players longer than Halfords Lane who have done nothing for Albion yet still get clapped on their return to The Hawthorns.

Sadly, his love affair with West Bromwich is over.

Whether Albion can find another hero like him in the future is a different matter. [Birmingham Mail]