Home Entertainment ”It’s Me And My Oga At The Top” Davido Bares It All...
Facebook
Twitter
WhatsApp 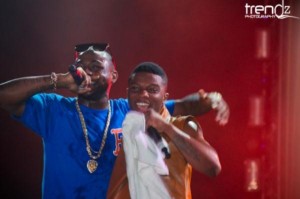 Davido was the star guest at this Sunday’s edition of the weekly Rubbin Mind talk show and yes, he bared it all…from his schooling to his music, his -ish with Wizkid, what he regrets,

Anyways here are some of the major things he said :

1. “When I was a child, I was stubborn…me and my friends used to rap and play back then”

2. Speaking on his schooling, he said “I couldn’t stay in school again because of some stuffs…” but he didn’t exactly reveal the stuffs

3. He says he is 20, says he doesn’t drink (really?) and says he didn’t know everything will be this quick or him…#omobabaolowo himself

4. On Wizkid “I was always his big fan, we just have people around us who are trying to fuel negativity” but when asked if Wizkid is better than him, he said “Nobody is berra than me”

5. Davido insists that “I am not a spoilt brat”

6. On Genevieve and Yvonne Nelson he says “I would go for Genevieve, she’s classy”

7. 3 things he wishes he can change about himself ” My height, I wish I’m taller; tattoos”

8. On his recent fight with a MOPOL, he said “it’s me and my oga at the top o…” and then he says “”I’m not going to drop an album this year, but I’m going to drop a lot of singles…I worry sometimes that I’m young…but my Oga at the top, God, has my back”