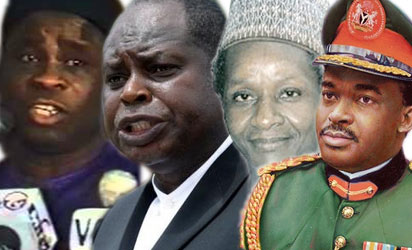 Jonathan presented a request for approval of the pardon to the Council of State which held a meeting at the State House in Abuja yesterday.

Although there was no official announcement on the outcome of the meeting, the news has been rife in the media.

Aside Alamieyeseigha who was governor of Bayelsa state from 1999-2005 but was impeached and later convicted for corruption, others also extended the same gesture were the late General Shehu Musa Yar’Adua, former Bank of the North managing director Mohammed Bulama, retired General Oladipo Diya, the late General Abdulkareem Adisa, Major Bello Magaji and Muhammad Biu.

Yar’Adua, Diya and Adisa were convicted of plotting a phantom coup against then Head of State General Sani Abacha in 1995. While Yar’Adua died in prison in December 1997, Adisa died several years after he was released from detention.

With the state pardon, Alamieyeseigha is now freed of the constitutional ban from holding public office in the future.