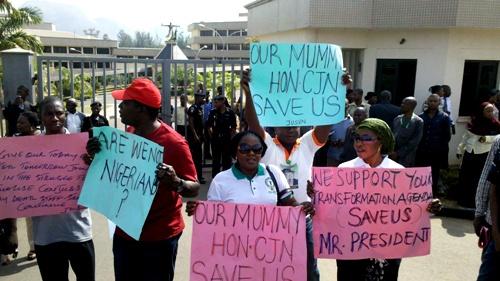 Judiciary workers across the federation, Monday, under the aegis of Judiciary Staff Union of Nigeria, JASUN, locked both the Chief Justice of Nigeria, CJN, Justice Mariam Aloma Mukhtar and other Justices of the Supreme Court out of office, even as they paralyzed legal activities in all the federal government owned courts in Abuja in protest of what they termed “inhuman work conditions.”

The workers who stormed Abuja in their numbers brandishing several placards, equally blocked the entrance gates to both the Appeal and Federal High Courts where they sang and danced till the close of work.

Efforts to pacify the aggrieved workers to allow the judges gain access to their offices proved abortive; a situation that led the CJN to direct the Chief Registrar of the apex court to quickly conduct a holistic investigation into the root cause of the crisis.

The workers are protesting Federal Government’s failure to issue a circular for the implementation of Consolidated Judicial Salary Structure, CONJUSS, which was approved for judiciary workers since 2009.

Meanwhile, the Chief Registrar of the Supreme Court, Mr. Sunday Olorundahunsi, has appealed to the striking workers to go back to work.

A statement issued by his read: “Chief Registrar of the Supreme Court, Mr Sunday Olorundahunsi has appealed to members of the Judiciary Staff Union of Nigeria, JUSUN to return to work on the grounds that their grievances are being addressed at the highest levels of authorities concerned alongside with the Nigeria Labour Congress, NLC.”