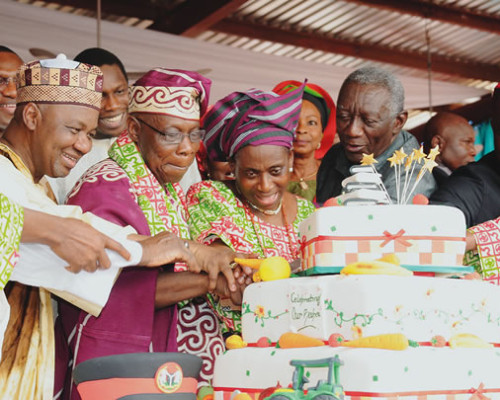 Days after his birthday celebration, felicitations have continued to pour in for former President, Chief Olusegun Obasanjo who clocked 76 years old on Tuesday, 5 March 2013.

In his birthday greeting contained in a statement by his Special Adviser, Oyekunle Oyewumi, former Abia state governor, Dr. Orji Uzor Kalu, thanked God for the life of Chief Obasanjo whom he described as a courageous  and bold leader who is ready to damn any consequence for the sake of peace and unity in our fatherland.

He said ‘Baba’, as he is fondly called, played a dominant role in holding the North, South, West and East together, adding: “In short, he is a bridge builder.

“His participation in peace missions in the African region has promoted bilateral and multi lateral relations between Nigeria and the outside world.” Kalu, who is the Publisher of Sun Newspapers, also congratulated Obasanjo on the recent launch of Obasanjo Foundation, an initiative he described as timely, coming at a time the government needs the support of philanthropist in meeting the unending needs of the teeming population.