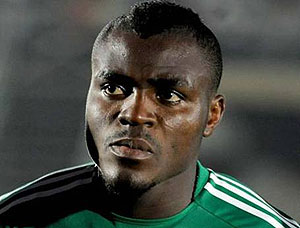 Super Eagles and Spartak Moscow striker, Emmanuel Emenike who is out injured has accused the Nigeria Football Federation and Super Eagles coach Stephen Keshi of being insensitive to his plight.

The South Africa 2013 Africa Cup of Nations, AFCON top scorer sustained a hamstring injury after scoring two goals to help Nigeria beat Mali 4-1 and set up a final clash with Burkina Faso. The Eagles went on to claim the AFCON trophy for the third time, after beating the Stallions.

Emenike, who was not invited for the Eagles’ March 23 World Cup qualifier with Kenya in Calabar due to his injury alleged on Friday that neither Keshi nor the NFF had contacted him since he returned to his Russian club after the AFCON tournament.

“I have not been treated well by the coach and the NFF because they ignored me so soon, so fast,” Emenike was quoted by MTNFootball.com as saying.

“Nobody from the NFF or the coach himself has called to ask me about my injury. I’m bitter about this. It is unfair and I can tell you that is why some players don’t give their best for the national team.

“When a player gets injured on national duty, the football authorities and coach ought to keep in touch to let him know he is loved.

“I am not a use-and-dump player. I will not act as one at all, because my club career is very important to me than anything.”

He added, “(Victor) Anichebe was injured while on national team duty last year but no-sone cared about him and you think he will come to national team to give his best.”

When contacted, the NFF Media Officer Ademola Olajire declined comments on Emenike’s allegation, saying he was not authorised to comment on the issue.