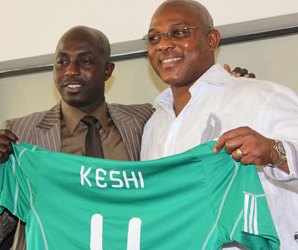 Amid unconfirmed reports that the Nigeria Football Federation is considering former Super Eagles gaffer – Samson Siasia – to once again handle the  Under-23 national team, his former team mate and head of the senior national team, coach Stephen Keshi, has supported Siasia to do a good job if he eventually lands the position.

“I have not heard about it but Samson is a Nigerian and a qualified coach so I believe he is capable of doing the job if he is given the work to handle the U-23 national team,” Keshi said.

Meanwhile Keshi has disclosed that all the invited Nigeria Professional Football League players are already in camp for the must win encounter even as the players are in high spirits.

“All the invited players are already in camp and I am happy that they responded quickly as usual, which is good for team spirit and the work ahead. The response has been great from the players,” Keshi disclosed.