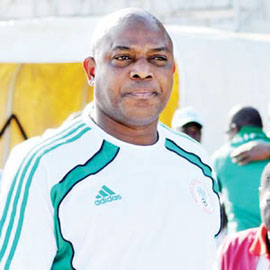 The Super Eagles Head Coach Stephen Keshi has advised the new players he called up for the match against Kenya to seize the opportunity to prove themselves as he says his team is still work in progress, and therefore all positions are still opened for contest and subsequent ownership.

According to Super Eagles media officer, Ben Alaya, “before training commenced, Head Coach Stephen Keshi, told the players to forget about the triumph of the team at the Nations Cup and concentrate on picking a ticket for the World Cup, coming up next year in Brazil. To the new players he said if they show enough readiness to break into the team they will be given the chance.”

Keshi invited 23 home based professionals in preparation for the March 23 World Cup qualifier against Harambee Stars of Kenya, and they all trained Tuesday morning at the training pitch of the Abuja National Stadium, except injured Kano Pillars central defender, Zango Umar,

The training was intense, very physical, with emphasis on quick and simple play. It lasted for about two hours with all the five coaches of the team playing their assigned roles.

Meanwhile, the coaching crew have decided to replace injured Umar with First Bank of Lagos central defender, Festus Ajah. Ajah is said to have impressed national team scouts in some of his club’s games and now has an opportunity to make an impression at the national team level.

Ajah was expected in camp by Tuesday evening in time enough for Wednesday’s morning training session.