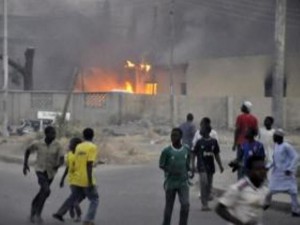 Ganmo community in Ifelodun Local Government Area of Kwara State has been thrown into confusion after a violent demonstration erupted over an alleged plot of the state government to install and grant recognition to a factional traditional ruler in the community.

The crisis reportedly began when the Ilorin faction got wind of a plan to install and present a Staff of Office to the Igbomina traditional ruler which led to 10 houses been razed and damaged while several people sustained various degrees of injuries during the two day demonstration which started on Sunday.

Meanwhile, the scheduled installation has been put on hold while police vans had been deployed to the area to forestall further breakdown of law and order.