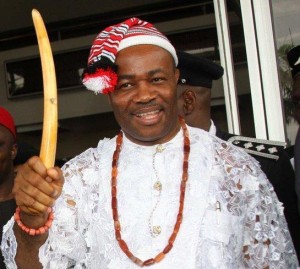 Governor of Akwa Ibom State, Godswill Akpabio has taken his spending spree a notch higher as he doled out N1 million each for ‘Mr Biggs’ to the six chairmen of the Peoples Democratic Party (PDP) from the South-South geopolitical zone who had converged on Port Harcourt for a party reconciliation session.

Earlier, Governor Emmanuel Uduaghan of Delta State had said that even if all the roads were tarred, members of the party would appreciate the provision of food on their tables.

“I join all my brothers in the South-South in welcoming you (Tukur). Even as an elected governor, I must tell you this. Even if you tar all the roads in the South-South without putting food on the table, our members will not appreciate the party” Uduaghan said.

Continuing, he said, “If you want to prevent our members from straying to other parties, you must put food in the stomach of our supporters.”

Shortly after the Delta state governor spoke, Akpabio, in reference to Uduaghan’s speech, added that he would give N1m to each of the party chairmen for their launch in order not to defect to other political parties.

He said, “My brother Governor, Uduaghan, said our members are hungry and that we must put food in their stomach so that they don’t stray to other parties. I am giving all the state chairmen of the party N1 million each for Mr Biggs. Our members must not be hungry.”