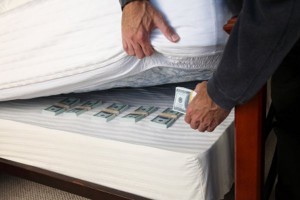 When couples are being joined, they are usually advised to live as one because they’ve become one. Becoming one as religious houses teach include sharing everything, including dirty secrets.

As much as this is taught however, studies show that over 70% of religious couples have secrets; they harbour some thoughts and keep some actions from their spouses.

Saliha Afridi, clinical psychologist and managing director of The Lighthouse Arabia (www.lighthousearabia.com), says that although couples should strive for transparency, there are instances when secrets are okay. She says, “If someone tells you something in confidence, you absolutely should not tell your partner, or anyone else. Also, although you shouldn’t lie about your past, it’s fair to say you don’t have to share everything either.”

Another area that deserves a degree of privacy is finances. Whether women are earning or not, they deserve access to money that can be spent without fear of reprimand or inquisition; a birthday present for the husband doesn’t feel like a gift if it shows up on his bank statement.

And would total honesty be good anyway? What good would it do to tell your partner that you find his brother attractive? Or, for your partner to tell you that he really doesn’t like it that you’ve put on weight?

Some people keep secrets from their partner because they are ashamed (of a spending habit, for example), others because their behaviour goes against the convention of marriage (such as an affair) – neither are condonable. However, if a secret’s truth would not harm the relationship, where’s the harm in keeping it to yourself?

Iris Krasnow, author of The Secret Lives of Wives (Gotham Books), interviewed 200 wives about their relationships. She says, “A secret is different than a lie. We all have secrets. People dye their hair, get plastic surgery, wear Spanx. I think secrets are healthy…”

What do you think? Is it right to keep things from your spouse or partners? What are those things you’d never tell your partner?