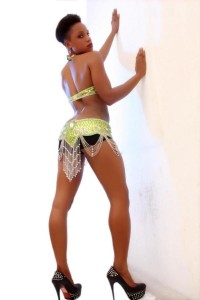 The story of Caroline Sam, the gospel singer popularly known as Maheeda, is pathetic but inspiring. She was raised as an orphan who hit the street at a tender age of 13 to fend for herself during which time she became a prostitute. In fact, Maheeda could not ascertain her real names because she was raised by foster parents whose name she adopted.

Now, things have changed as Maheeda has turned her life around and eventually became someone to reckon with in the music industry.

The light skinned and slim built mother of one stormed the music scene about two years ago with a single, Oko Yapa that rocked the airwaves. Indeed, Maheeda attracted attention not because her song was extra-ordinary but because of the fact that she appeared weird so much that her almost nude pictures were everywhere, and she was living big.

Recently, the ‘Naija Bad Girl’ as she’s used to be called, turned a new creature by giving her life to Christ, which has made her embrace gospel music as against the secular that shot her into the limelight.

TS Weekend engaged the talented singer in an interview session and she opened up on a number of interesting issues that include her experience as a prostitute, her growing up as an orphan and her marriage to a Whiteman. She also spoke extensively about the turning point of her life as well as her music career.

What is happening to Maheeda?

That depends on what you mean particularly.

Of course, it’s about what you are known for, music?

Yeah, I got born again but I’m still a musician and an entertainer. I have been working on my album and I will be shooting a video soon. That’s it basically.

How many tracks are you looking at and who are you working with on the new album?

Coming from a secular music background, how easy is it to compose gospel tunes?

It’s actually easy, although, in the beginning, it wasn’t because I was confused. There is this mentality that when you are born again, you start working on your outer appearance and not inner while it’s suppose to be inside and then outside. I also started the same way like trying to change my looks and the rest. So, it was indeed kind of difficult composing songs because I did not have enough word of God in me but after then I had to relax for like a year, going to church, listening to pastor Chris, teaching me and I’m still learning so I have enough words to put in my songs, so now I’m ready.

Which of the pastor Chris are you talking about and is it that this pastor attends to you personally from the way you are talking?

I’m talking about Pastor Chris Oyakhilome. I have never seen pastor Chris in person but he’s so real to me like the way we are talking now.

You are still in the music industry despite switching to gospel. What relationship do you have with secular acts you used to mingle with?

We are still friends. I take the males like my brother and the ladies as my sisters. The mothers know my story as an orphan so they are my mum. I was confused before because I’m an orphan but now I have realized that the Christian family is my family. I used to have boy friends, I had like two or three, I used to be the ‘Naija Bad Girl’ but I changed it. I did not push them aside, I pray for them always so they can see the light the way I did. Initially, going to them was difficult because I was not strong but now I go to them, we pray together and share the word.

Did you encounter a particular incident that made you become a born again?

Honestly, it was the same words in the Bible, the same ministration. It was just time because the words that I heard that transformed me were the same words some other people heard. Although, at that time, I was sick and all sorts of tests were conducted on me including HIV, pregnancy and others, and the doctor said I was alright but I was still sick and it was like my head was about to blow up. Later, I went to the church on a weekday and I lied down at the altar and was talking to God that ‘you have taken all my family already and now I am feeling like this’. I left and went to look for my boyfriend but I was still not feeling fine. I was feeling that my life was not normal, that I might die if I did not surrender my life to Christ. And I kept getting the message that ‘you are neither hot nor cold’, I got the message through phone and later in the church, so that was all and I became a new creature.

How easy was it to leave your usual ways?

You were so daring, posting almost nude pictures of yourself when you came into the industry and people were talking about you. Some felt you must be a prostitute. What would you say to this?

Yeah, I was a prostitute and I’m not ashamed to say it. It’s past tense and we all have our past. The beauty of it is that if Christ has done something in your life and you can’t say it, what is the need? I think I went through all that so I can really speak out. I have been through all that so I can speak, talk to the girls who are still into it and make myself an example. Although, it’s not nice for people to hear and it’s not something to be proud of but for the sake of those prostitutes outsides, I have to say it.

Did you become an orphan by loosing your parents or you never knew them?

I had my mum but she decided to leave me with a neighbour before leaving the house, after seven years she came back and she died, and that is all they know about me

What led you to music in the first place and what made you think you can sing?

I have always loved singing and may be the India films we used to watch as kids also formed part of the interest. I could remember I used to sing when washing plates and doing stuffs and I always wanted to do all that had to do with music and drama in primary school When I was old enough to sponsor myself, I decided to do music, and later, professionally.

Some say you changed your way because you got married?

That is not true. My husband is white and you know white people support their wives. My husband said he didn’t want to be involved in my career and I should also keep his daughter out of it. I was actually praying for it before he said it. My husband has been very supportive for years; he took me to South Africa to shoot my first video. He has spent millions on my career.

How long have you been married and how many kids do you have together?

We have been married for about two years but there’s no child yet. I had my daughter before I met him but he adopted my daughter.

How did you both meet and what is keeping you from having children for him?

I met him in Port Harcourt eleven years ago; we have been together before my music. We are waiting on the Lord for children.

What was your first experience as a prostitute like?

It was strange, even though I can’t really remember (laughs). What I can remember is that it was strange. I was very young but I had to do it. It was scary I think.

At what point did you decide to stop prostitution and what made you stop?

People think there is no much money in gospel music. What is your reaction?

That is what you think, you think there is no much money in gospel music but I am there and I can tell you there is so much money. I think gospel artistes don’t just brag, it’s the secular ones who come to the television to show stuffs which is not bad but the gospel musicians don’t feel like showing off. But believe me they are making money.

Tell us about your background?I was told my father was from Edo State and my mother, Igbo. My mum named me Caroline but Sam, which is my surname, is the name of my guardian who my mother left me with.