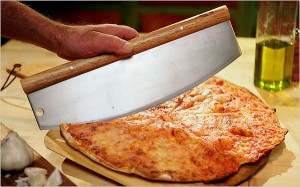 A hungry man who ordered a pizza meal would be thanking his lucky stars after finding an ingredient he could hardly have imagined, a blade, in the pizza. No one suffered an injury.

Following the incident which happened in Karama, an official at Dubai Municipality has urged residents to immediately notify authorities should they come across any contamination in their food.

“My friend and I called the [food outlet’s] delivery number for a chicken pizza at about 2.20am. The pieces I had were fine, but it was only when my friend ate a slice the next day that he found the blade. At first he thought it might have been a bone, and was shocked to see the blade because it could have cut him,” said Clyde Fernandes, a resident of Karama.

“I complained to the pizza outlet but all they offered was a complimentary pizza, and that is not the kind of apology that we were expecting. I already lodged a complaint with Dubai Municipality and inspectors have already collected the blade as part of their investigation,” he said, stressing that he hopes that some action will be taken to ensure that nobody else faces such an experience.

A municipal official explained that the civic body acts according to a Corrective Action Plan on receiving complaints of food contamination, saying the system will determine what course of action needs to be taken.

“In this case, it is difficult to determine whether the blade was in the flour or in the ingredients, so it is vital for us to launch an investigation and find out how the pizza was contaminated,” said Bobby Krishna, Senior Food Studies and Surveys Officer, Food Control Department at Dubai Municipality.

“It generally depends on the gravity of the situation, and we have to take into consideration whether it was a first-time offence or if the outlet had multiple violations and other complaints have been reported in the past,” Krishna said.

“All lodged complaints have to be closed within 24 hours, so we will contact the company responsible and let them know within a day what action needs to be taken in order to prevent such an incident from happening again,” he said. [GN]