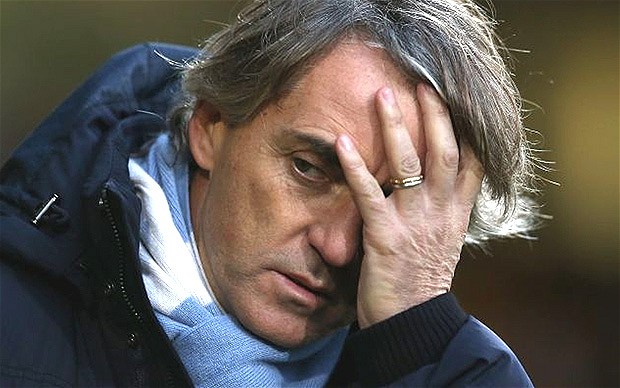 Manchester City manager Roberto Mancini has given up on his club’s Premier League title challenge on Thursday, saying his focus for the rest of the season was to keep the teams below them at a safe distance.

United have shown no signs of relenting under the pressure of wresting the English title back from their near neighbours and have won their last six league matches.

“It’s over but this doesn’t change anything because we should do our best from now to the end,” Mancini told reporters.

“Every top team, when they can’t win a title, should still try to play well and win all their games.”

Mancini made the same assessment last season when City trailed United by eight points with six games to go before they rallied to snatch the title on the final day on goal difference.

“This is different (to last season),” Mancini added. “I don’t know how we will finish this season, because we have Chelsea four points behind us and Tottenham five points behind.

“We have nine games left and for this reason it’s important we keep working hard and well.”