Home National News Odd News Meet The Woman Who Only Eat Potatoes Because She’s Afraid Of Other...
Facebook
Twitter
WhatsApp 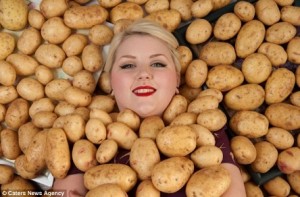 A young woman has eaten her way through more than 13,000 jacket potatoes – because she has a phobia of almost all foods.

Claire Jones, 23, has panic attacks and is physically sick at the thought of eating proper meals.

The barmaid has a bizarre disorder which meant she eats practically nothing but potatoes, cheddar cheese and coleslaw – and only a particular brand.

Very occasionally she will try some bread, sausage or a burger, but even this slight change in her diet makes her feel sick – as does the smell of cooking.

Selective eating such as Claire’s is a recognised condition and can have negative health implications –  in her case, persistent infections and anaemia.

She said: ‘I’m fed up of eating jacket potatoes but I don’t know how to stop. I keep getting ill. My immune system is really bad.

‘I’ve had a sinus infection for the past six months. I’m constantly tired.’

She added: ‘Trying new foods has made me physically sick, so I just don’t do it now.

‘It’s so bad, it’s taken over my life. I’m scared to go to the supermarket or eat out with friends.

‘I went to a work party and when they brought out the buffet, I started shaking. I couldn’t get out quick enough.

‘A friend at uni tried to get me try new foods. I put something on my fork and almost got it to my mouth but then I panicked. I threw the fork down and had a panic attack.

‘I’ve always been fussy but it was only recently I realised it was an actual disorder.’

Claire blames her diet on being a picky eater, which started when she was just a baby.

She began refusing food aged two. She said: I think it was built in me from birth. ‘Mum said I would go for days without eating.

‘I broke my leg really badly when I was five and ended up in hospital. I refused to eat anything so Mum had to buy me a jacket potato from the canteen for lunch and then bring one from home for dinner.

‘I’ve never eaten any of my birthday cakes but Mum still buys me one every year. She spent £50 on a giant cupcake for my 21st and I didn’t eat a bite.’

Claire lives with her mother Debbie, 50, in Wellingborough, Northants and will only eat food prepared by her.

She’s had to miss out on family meals and it’s affecting her social life.

Claire said: ‘So many things revolve around food – like going out for dinner and going to the cinema.

‘I’ve gone out before and they’ve not had what I can eat on the menu so I’ve sat there and not eaten anything. I’ll just go hungry.

Friends and family have tried to persuade her to vary her diet. She said: ‘Mum gets really worried about me. She says I need to see someone. She says it’s not right.’

She said: ‘I also hate watching people eat. The worst thing I have to do at work is a table check, because you have to interrupt people while they’re eating.

‘They didn’t say anything about waitressing at the job interview. I just thought it was bar work. I don’t think I would’ve taken the job if I’d known.’

Her mother Debbie, who also has a son, Glenn, 27, said: ‘I always cooked meals from scratch. Glenn was very good and loved his food but Claire was always very difficult with eating.

‘When she was younger and we went camping, I’d have to bring food from home. I’d try to buy food from the supermarket where we were staying but she refused to believe it was the same.

‘I always make sure I have jacket potatoes in the cupboard or she’d probably not eat much at all.
‘I do worry because she’s not getting the right vitamins.’

Claire has joined a Selective Eating Disorder support group and wants to finds a medical specialist or psychologist to help her beat the condition.

She said: “Going on the group I realised there are other people like me. It’s made me feel less alone.
‘It’s not that I want to eat jacket potatoes. It’s just the only thing I can eat.’