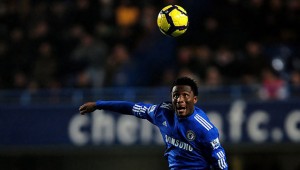 Nigeria midfielder John Mikel Obi is bristling at reports that he is about to get married to model Sandra Okugbue.


A national tabloid reported on Monday that Mikel was set to wed the former toilet soap model, but the midfielder angrily dismissed the claims.

“I don’t understand where this is coming from,” Mikel told KickOffNigeria.com on Monday. “I know her. We’re friends, but we haven’t spoken in a long time and definitely not about marriage.”

The report claimed that the traditional introduction has been scheduled for this Sunday in Onitsha, but Mikel was firmly categorical in his dismissal. “There’s nothing like that,” he said.

Mikel played in Nigeria’s 1-1 draw against Kenya on Saturday, and joined the rest of the squad in attending a reception held in honour of their African Nations Cup triumph by Akwa Ibom State governor Godswill Akpabio on Sunday in Uyo.

The midfielder flew out to London later that night.