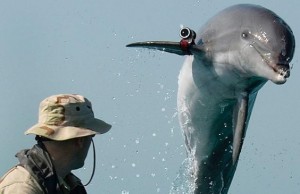 Three military-trained dolphins in Ukraine have escaped a naval training base.

The animals were being taught how to subdue enemy divers and detect sea mines, reports the Daily Express.

A formal Soviet naval officer stated his belief that the dolphins are no danger to anyone.

“Control over dolphins was quite common in the 1980s,” he said.

“If a male dolphin saw a female dolphin during the mating season, then he would immediately set off after her. But they came back in a week or so.”

The country’s defence ministry has refused to comment on reports regarding training dolphins for military use.