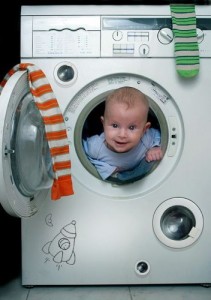 This is terrible… tragic and terrible…A 10 day old infant newborn was killed when her mother, who was reportedly high on drugs, threw the baby into the washing machine where the baby died after going through an entire washing machine cleansing cycle.

The infant, Maggie May Trammel, was found by her great aunt, who was inside the Oklahoma home and went looking for the infant after she found her mother passed out on the sofa.

According to The NY Daily News, the great-aunt heard a clunking noise coming from the washing machine. When she opened it, she found the newborn dead.

When asked about the situation, she told police that she remembers wrapping her daughter in a blanket and giving her a pacifier, but doesn’t recall how the baby ended up in the washer machine. She should be locked up for life for being so selfish and irresponsible around her infant.

Fiddler is being charged with child neglect but prosecutors are hoping for a more significant charge, including murder; pending a full investigation.