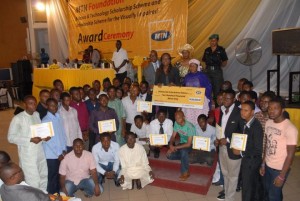 MTN has again given back to the society through its foundation, MTN Foundation as about 238 Nigerian students in public tertiary institutions in the Northern zone were recently presented with N200,000 scholarship awards each.

Presenting the award, Chairman, MTN Foundation, Ambassador Hamzat Ahmadu, said the gesture was born out the organization’s passion to reward excellence in students who were found worthy and have worked extremely hard and deserve an opportunity to pursue their dreams of higher education.

“We celebrate academic excellence in students who have worked extremely hard and who definitely deserve an opportunity to pursue their dreams of higher education. We also recognize the exemplary efforts of a special group of students who have to overcome daily challenges in their quest for a brighter future,” he said.

“It is about shaping Nigeria’s future through education. It is about making an investment in the lives of tomorrow’s leaders, by providing them with an opportunity to pursue their dreams despite limitations. To the beneficiaries, you have done to earn a place in this scheme, and your parents and guardians should indeed be proud of you. Implore you not to rest on your oars,” said Ahmadu.

According to Amb. Hamzat, the gesture would also be extended to other successful students in Owerri and Lagos for the Eastern and Western zones on March 7th and 14th respectively.

In her goodwill message, the Minister of Women Affaires and Youth Development, Hajia Zainab Maina represented by Mr. George Osy described the gesture as indicative of the organization’s commitment to academic pursuit of persons with disability and financial challenge.

For her, the gesture would bring unprecedented advancement and bridge the widening gap between the less privileged persons and the rest of the society.

“It is an advancement of education equalization. It is coming at a time the present administration is committed to partnering with corporate entities to take education in Nigeria to the next level. This group constitutes 35 percent of the population, and I think that it is necessary to extend such support to them. I enjoin every beneficiary to see this as an opportunity to work harder and contribute to the nation building,” he said, calling on other corporate organizations to emulate the gesture.

Also speaking, the minister of education, Prof. Tukayaatu Rufai represented by Mrs. Florence Chukwu, while commended MTN for rewarding hard-work, said that the importance of the gesture to nation’s building cannot be over emphasized and urged the company to sustain the initiative.

The executive Secretary of the Foundation, Ms. Nonny Ugboma said the benefiting students were considered worthy of the awards after series of test and examination procedures that revealed them as true champions in academics.

According to her, about 500 students joined the scheme while about 800 returned for maintaining their high grades. She noted that about 300 students graduated from the scheme in December 2012 and were given technical training to enable them become employable in the labour market.

“For us, it is not just about award, we believe on building their capacities on interview techniques, building their Curriculum Vitae, all to make them employable. Our reach is beyond universities. We also involve polytechnic and colleges of education students from both federal and state government. We are confident that when we give them the final handshake, they will be ready to face the labour market with prerequisite skills and capabilities,” she added. [VN]