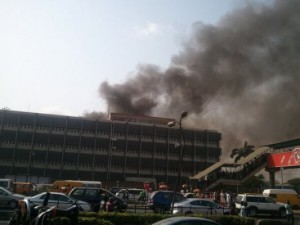 An inferno of a yet to be known source gutted four live Multichoice TV studios at the weekend, including those of Supersports and MNET, in Ojota, Lagos.

Eyewitnesses say the fire which started at about 3.30pm Nigerian time destroyed all studio equipment before fire service personnel arrived at the scene. Journalists covering the blaze were harassed, and one, an employee of Television Continental [TVC] had his recording camera smashed by an overzealous member of staff at the Multichoice premises.

“We watched as the fire brought particles of burning items from the Philips House”, said one of the bystanders, testifying to the wildness of the fire.

Corporate Head of Multichoice, Mr. Segun Fayose confirmed to our correspondent that the Super Sports studio and the MNET performance setting used in the production of some entertainment and drama programs were also consumed by the fire. He added that the real extent of the fire is yet to be ascertained.

English Premier League matches on Super Sports usually anchored by Moses Praiz, Chisom Mbonu, or Charles Anazodo could therefore not be analysed at the Super Sports studios at the weekend.

Below is a statement on the fire outbreak released by Multichoice:

It has been confirmed that a fire broke out yesterday afternoon (Saturday March 2, 2013) at the Ojota Studios facility, which is home to both M-Net and SuperSport productions in Nigeria. At this time, the fire is under control and an investigation is underway to determine the cause of the blaze. Whilst the fire appears to have caused significant damage to the facility, which may result in some screening delays for programs recorded on site, M-Net and SuperSport are already hard at work with a view to resuming production as soon as possible in order to minimize any impact on viewing audiences at home. Further M-Net, SuperSport and MultiChoice are deeply thankful and grateful that no-one was injured during this unfortunate incident.

Finally, M-Net has confirmed that the fire will not affect its plans for next weekend when it hosts its inaugural AfricaMagic Viewers’ Choice Awards, in association with MultiChoice, which is to be screened live from Lagos to over 50 countries on the African continent.
More information on this matter will be communicated as it becomes available. Members of the public are thanked for their concern and messages of support already received. At this time, the site has been closed and will remain this way until further notice