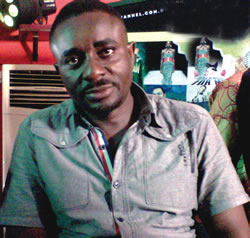 Nollywood actor and factional president of the Actors’ Guild of Nigeria, Emeka Ike, was a special guest of V Channel, a new pay television in Lagos, last Friday.

The actor had arrived in the studio of the TV station in the Ogba area in company with fellow actor and host of the Gulder Ultimate Search reality show, Chidi  Mokeme, and the president of the Arewa Consultative Forum, Yerima Shettima.

Occasionally,  Ike squirmed with discomfort, especially when he was asked questions that appeared to probe a little too deep into his private life. But the occasion afforded him the opportunity to address some issues concerning his constituency, the Nigerian movie industry.

When asked to relate his experience as a factional president of the AGN, Ike let loose a canon. “I really don’t care about the AGN because it cannot put food on my table or pay my bills,” he said.

Yet, for the benefit of those who felt he had ‘gate-crashed’ into the body, he tried to set the records straight.

“I was actually invited into the fold by members of the then Board of Trustees of the AGN to solve the problems of the body. At the time, they told me that the problem was Ejike Asiegbu. They said he had been in charge for too long and had refused to leave. There was even a case pending in court.

“So, since I believe in the rule of law, I decided to get involved. At the end of the day, I discovered that the same people in the board of trustees, who had invited me to take over, were the problem of the AGN. They were not more than five people. But the way they ran the board, it meant that they determined what happened in the movie industry.

“I had to take the bull by the horns. I decided that those five people must leave the AGN or nobody else would have a place in the industry,” he said.

Eager to shake off the ‘bad boy’ image that had stuck to him ever since his career kicked off, he went on to correct certain notions that most movie fans have about him.

“Some people think that I am a trouble maker. They think I am a bad boy in the movie industry. But that is not who I am. I hate injustice and I fight for the oppressed whenever I can. I will give you an illustration.

“One day, I was passing by Oshodi Bridge when I saw a physically challenged person struggling with a policeman. I had to pull over immediately and confront the policeman, though he was armed. I succeeded in stopping the fight. This is the kind of things I do.

“I believe in hard work. I don’t date rich women for money. I believe that you can become a millionaire by selling akara. My mother sold akara to train me and I am a millionaire today,” he said.

The actor, who wants to be remembered for his humanitarian deeds, would like to see Nollywood witness a radical shift in terms of the language of production. He wants films to be produced in indigenous languages and actors to be proud of their cultural heritage.

“We should be making more films in Igbo, Yoruba, Itsekiri, Efik and other Nigerian languages. I don’t like it when we speak English all the time and try to imitate the American accent,” he said.