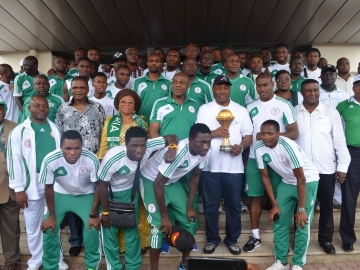 The Naira rain for the victorious Super Eagles continued yesterday when Dr. Godswill Akpabio of Akwa-Ibom State rewarded the coaches, players and officials of the team for lifting the Africa Cup of Nations in South Africa last month.

Head Coach, Stephen Keshi, got two million Naira; his assistants got one million Naira each; the players were rewarded with a million Naira each, while the back room staff got five hundred thousand Naira at the event which took place inside the Conference Hall of Government House, Uyo, Akwa-Ibom State.

The biggest recipient of Governor Akpabio’s gesture was assistant captain Vincent Enyeama, who aside the initial cash prize announced for the team, got a three bedroom flat being an indigene of the state.

The team, as a token of appreciation, presented the Governor with the national team jersey No.9 as well as the AFCON trophy.

The Eagles have thus far received over $9 million in cash gifts for winning their third AFCON title.