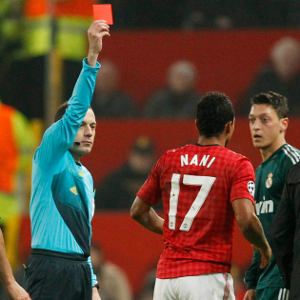 The referee who controversially sent-off Manchester United winger Nani in their 2-1 defeat to Real Madrid on Tuesday, has stood firm by his decision saying he made the right call.

Cuneyt Cakir showed the Portuguese international the red card for a foul on Alvaro Arbeloa 11 minutes into the second-half with United 1-0 up on the night and leading 2-1 on aggregate.

However, two goals in 13 minutes after the incident changed the tide decisively in Madrid’s favour and left United boss Sir Alex Ferguson and many of his players fuming at the final whistle.

“I feel fine and don’t doubt my decisions,” the Turkish official told Spanish sports daily AS.

“The red card shown to Nani was correct. The world will recognise the truth with time.”

The official who said he has received even more harsh criticisms in the past over his decisions on the field of play, said, “I can do so again. I try to do my job correctly and I am doing well. I need to continue like this. I do my job perfectly.”